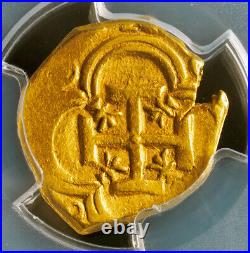 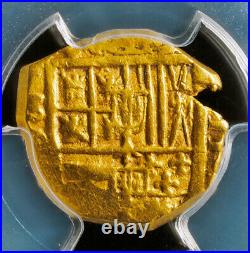 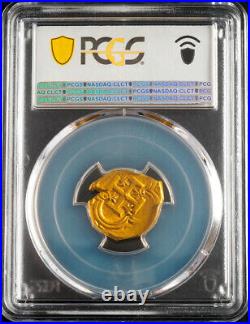 1621, Spain, Philip III. Scarce Gold 2 Escudos Cob Coin. Mint Place: Seville (S). Date not visible, possibyl 1612 or 1622? Certified and graded by PCGS as AU-58! None higher graded at PCGS! Obverse: Cross of Jerusalem within quatrefoil with invereted leaf terminals. Annulets in outer fields. Comment: The tips of the legend or a date [16]21 or 22? At 12 o’clock recognizable! Reverse: Coat of arms of the Spanish line of the House Habsburg. Assayer and mint initials (“S” above barely visible “D”) to left, value. For your consideration a beautiful and rare 2 escudos gold cob coin, struck under Philip III of Spain between 1598 and 1621 at the Spanish mainland mint of Seville. A magnificent full-weight and 100% authentic gold cob coin, tied for the finest ever graded by PCGS! The first coinage of the New World and what comes to mind when we think of Pirate Treasure are pieces of eight. These first coins, often called cob coins, were made from roughly cut planchets (blanks) by striking them with hand dies. The word Cobb comes from a simplification of the Spanish phrase, Cabo de Barra, which translates as, from a bar. After the coins are struck, they are weighed by an assayer who cuts off any excess Silver which is why most coins have some of the impression cut away. The Cobb coin, like anything that is no longer available is becoming very scarce and hence more valuable. The few remaining Coins are the last vintage of the glory days of pirates and Treasure hunting and are fast disappearing into private hands. Was the King of Spain and King of Portugal and the Algarves, where he ruled as Philip II of Portugal Portuguese. , from 1598 until his death. His chief minister was the Duke of Lerma. Philip III married Margaret of Austria, sister of Emperor Ferdinand II, and like her husband, a member of the House of Habsburg. Born in Madrid, the son of Philip II of Spain and his fourth wife (and niece) Anna, daughter of the Emperor Maximilian II and Maria of Spain. He shared the viewpoints and beliefs of his father, including his piety, but did not inherit his industry. The diligent old king had sorrowfully confessed that God had not given him a son capable of governing his vast dominions, and that he had foreseen that Philip III would be led by his servants. This assessment ultimately proved correct. In the view of historian J. Elliott, his “only virtue appeared to reside in a total absence of vice”. Unlike his father, Philip was not interested in the day-to-day business of government. He spent many months each year travelling to different palaces with his court, away from the government centre. His household costs rose enormously at a time of falling income. He died at Madrid on. The story told in the memoirs of the French ambassador Bassompierre, that he was killed by the heat of a. (a pan of hot charcoal), because the proper official to take it away was not at hand, is a humorous exaggeration of the formal etiquette of the court. The item “1621, Spain, Philip III. Scarce Gold 2 Escudos Cob Coin. Top Pop 1/0! PCGS AU58″ is in sale since Tuesday, December 29, 2020. This item is in the category “Coins & Paper Money\Coins\ World\Europe\Spain”. The seller is “coinworldtv” and is located in Wien. This item can be shipped worldwide.