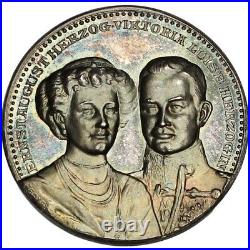 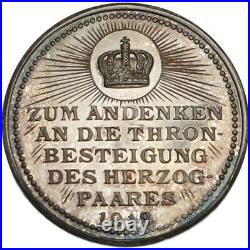 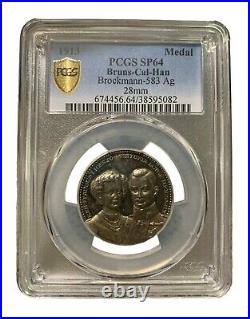 Ernst August with Viktoria Luise silver Medal. Commemorating the Royal Marriage (28mm, 9.12 g, 12h). ERNST AUGUST HERZOG VIKTORIA LUISE HERZOGIN, facing busts of Viktoria Luise and Ernst August / Rayed crown; below, ZUM ANDENKEN / AN DIE THRON / BESTEIGUNG / DES HERZOG / PAARES / 1913 (in remembrance of the ducal accession of the royal couple) in six lines. Brockmann 584; Fiala 5957. Attractively toned, with a rich palette comprised of cobalt and magenta; exceedingly lustrous, with just a few light hairlines. The top pop in the PCGS census for the type. The marriage of Ernst August and Viktoria Luise, which took place on 24 May 1913, was a gallant affair with over 1,000 guests in attendance. Given the union’s political importance (it ended the long-standing rift between the Houses of Hannover and Hohenzollern) and familial connections (Ernst August was, on his paternal side, the great-grandson of another Ernst August, the fifth son of Great Britain’s King George III, and, on his maternal side, the grandson of King Christian IX of Denmark, the “father-in-law” of Europewhile Viktoria Luise was, on her paternal side, the daughter of the German Emperor Wilhelm II and the great-granddaughter of Great Britain’s Queen Victoria), it served as an important and momentous European gathering. Noteworthy guests were Wilhelm’s cousinsGreat Britain’s King George V and wife Mary, along with Russia’s Czar Nicholai II and wife Alexandra. The wedding represented the largest gathering of reigning monarchs in Germany since her unification in 1871, and one of the final grand events before Europe, and much of the world, would be plunged into the chaos of World War I little over a year later. The item “GERMANY Brunswick 1913 silver Marriage Medal PCGS SP-64 Top Pop Toner” is in sale since Friday, July 3, 2020. This item is in the category “Coins & Paper Money\Exonumia\Medals”. The seller is “numismagram” and is located in San Jose, California. This item can be shipped worldwide.