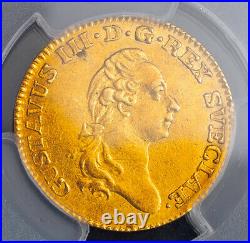 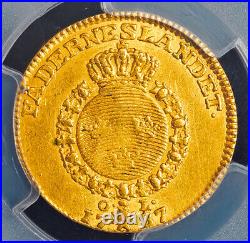 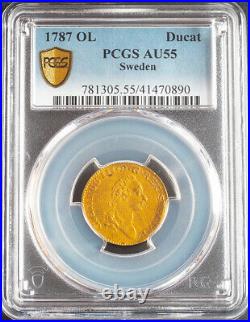 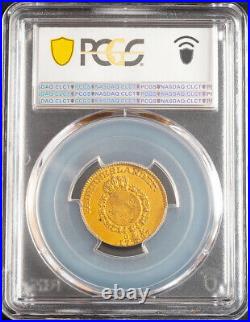 1787, Kingdom of Sweden, Gustav III. Rare Gold Ducat Coin. Mint Year: 1787 Mintage: 5,009 pcs. Denomination: Ducat Mint Place: Stockholm Mint Master: Olof Lidijn O. Certified and graded by PCGS as AU-55! Weight: 3.48gm Material: Gold. Obverse: Bare bust of Gustav III of Sweden right. Reverse: Crowned globe with three crowns inside, surmounted by cross-order chain. Mint official´s initials O. And date (17-87) split at sides. Gustav III 24 January O. 13 January 1746 29 March 1792, note on dates also called. Was King of Sweden from 1771 until his assassination in 1792. He was the eldest son of Adolf Frederick, King of Sweden[1] and Queen Louise Ulrika (a sister of King Frederick the Great of Prussia), and a first cousin of Empress Catherine the Great of Russia by reason of their common descent from Christian August of Holstein-Gottorp, Prince of Eutin, and his wife Albertina Frederica of Baden-Durlach. Gustav was a vocal opponent of what he saw as the abuse of political privileges seized by the nobility since the death of King Charles XII. Seizing power from the government in a coup d’état, called the Swedish Revolution, in 1772 that ended the Age of Liberty, he initiated a campaign to restore a measure of Royal autocracy, which was completed by the Union and Security Act of 1789, which swept away most of the powers exercised by the Swedish Riksdag (parliament) during the Age of Liberty, but at the same time it opened up the government for all citizens, thereby breaking the privileges of the nobility. A bulwark of enlightened despotism, Gustav spent considerable public funds on cultural ventures, which were controversial among his critics, as well as military attempts to seize Norway with Russian aid, then a series of attempts to re-capture the Swedish Baltic dominions lost during the Great Northern War through the failed war with Russia. Nonetheless, his successful leadership in the Battle of Svensksund averted a complete military defeat and signified that Swedish military might was to be countenanced. An admirer of Voltaire, Gustav legalized Catholic and Jewish presence in Sweden, and enacted wide-ranging reforms aimed at economic liberalism, social reform and the restriction, in many cases, of torture and capital punishment. The much-praised Freedom of the Press Act of 1766 was severely curtailed, however, by amendments in 1774 and 1792, effectively extinguishing independent media. Following the uprising against the French monarchy in 1789, Gustav pursued an alliance of princes aimed at crushing the insurrection and re-instating his French counterpart, King Louis XVI, offering Swedish military assistance as well as his leadership. In 1792 he was mortally wounded by a gunshot in the lower back during a masquerade ball as part of an aristocratic-parliamentary coup attempt, but managed to assume command and quell the uprising before succumbing to sepsis 13 days later, a period during which he received apologies from many of his political enemies. Gustav’s immense powers were placed in the hands of a regency under his brother Prince Carl and Gustaf Adolf Reuterholm until his son and successor Gustav IV Adolf reached adulthood in 1796. The Gustavian autocracy thus survived until 1809, when his son was ousted in another coup d’état, which definitively established parliament as the dominant political power. A patron of the arts and benefactor of arts and literature, Gustav founded the Swedish Academy, created a national costume and had the Royal Swedish Opera built. In 1772 he founded the Royal Order of Vasa to acknowledge and reward those Swedes who had contributed to advances in the fields of agriculture, mining and commerce. In 1777, Gustav III was the first formally neutral head of state in the world to recognize the United States during its war for independence from Great Britain. Swedish military forces were engaged by the thousands on the side of the colonists, largely through the French expedition force. Through the acquisition of Saint Barthélemy in 1784, Gustav enabled the restoration, if symbolic, of Swedish overseas colonies in America, as well as great personal profits from the transatlantic slave trade. The item “1787, Kingdom of Sweden, Gustav III. Rare Gold Ducat Coin. Top Pop! PCGS AU-55″ is in sale since Monday, March 1, 2021. This item is in the category “Coins & Paper Money\Coins\ World\Europe\Sweden”. The seller is “coinworldtv” and is located in Wien. This item can be shipped worldwide.