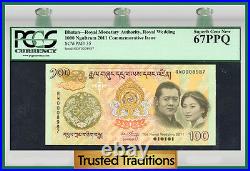 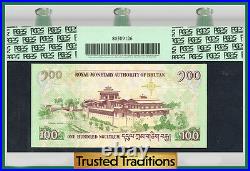 TT PK 35 2011 BHUTAN 1000 NGULTRUM ROYAL MONETARY PCGS 67 PPQ SUPERB TOP POP! 2011 1000 Ngultrum from Bhutan. Royal Monetary Authority, Royal Wedding. Pk 35 and serial number RW0008987. Graded 67 Premium Paper Quality Superb Gem New by PCGS. According to PMG Population Report, the highest grade received for this note was 66, making this a population of one and finest known! Perfectly centered with great embossing and visible crispness! Black serial number located on the front of the note. In celebration of the historic Royal Wedding of His Majesty the King Jigme Khesar Namgyel Wangchuck and her Majesty the Queen Ashi Jetsun Pema on the 13th October 2011, in the Year of the Female Iron Rabbit, the Royal Monetary Authority of Bhutan is honored to issue the Royal Wedding Commemorative Nu. The obverse of the note bears the Portrait of the Royal Couple, their Majesties the King and Queen with Rays of Light emanating from behind to mark the ushearing of a new era in the Monarchy. The Royal Wedding Logo, place in the center of the note embodies the symbolic Khorlo (Wheel), signifying the Royalty; Two Circles with the Dhar (Ceremonial Scarf) signifying the Eternal Union Purity of the Union. The obverse of the note also embodies the National Emblem as well as the portrait of a Mythical Angel carrying the Raven Crown, to symbolize the Blessings showered on the Royal Union and Prayers for the Prosperity of the Wangchuck Dynasty. The reverse of the note features the portrait of the Punakha Dzong (Fortress), a symbol of the Traditional Institution of the Monarchy as well as two Dragons from above, to signify Protection over the Kingdom and Monarchy, and symbolic of Bhutan’s name- Land of the Thunder Dragon. Note- Due to the new and burgeoning world currency market, PCGS has not yet made public a world currency population report. PCGS is slated to publish a population database in the coming months. Until that time, Trusted Traditions World has used the PMG population reports solely as a guide to help evaluate the rarity of all of our notes. Should your needs require, we are happy to request from PCGS an exact population report on a case by case basis. It’s the early bird who catches this worm and those who invest and acquire the highest grades that they can afford will benefit better then any other rarity that we are aware of!!! Please always look at our Auctions as we will continue to bring you the finest material the World has to offer at today’s severely under valued prices. Mark our words as we know what we are talking about! 3-5 Years from now you will only say to yourself, I coulda woulda shoulda bought more than I did. We want to always fulfill your total happiness and pleasure. This item is in the category “Coins & Paper Money\Paper Money: World\Asia\Bhutan”. The seller is “trustedtraditions.com” and is located in this country: US. This item can be shipped worldwide.