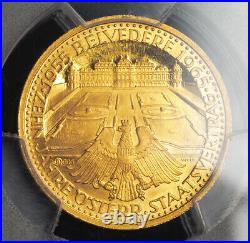 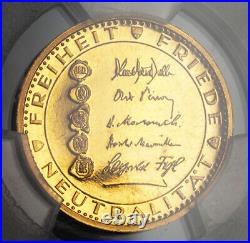 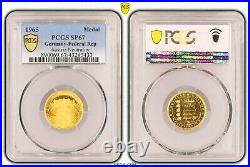 Gold “State Treaty Decennial” Medal. Mint Year: 1965 Mint Place: Vienna (A) Medallist/Engraver: Welz Reference: Friedberg -, KM. Denomination: Medal (1½ Ducats) Condition. Certified and graded by PCGS as SP-67! The slab says Germany, which is of course wrong as we can clearly see the Vienna mint mark”(A)” on the medal! Weight: 4.5gm (1½ Ducat) Material: Gold. Obverse: Bird-eye view of the Belvedere Palace with the heraldic single-headed eagle of the Republic of Austria (with sickle and hammer in claws, which are bound by broken chains). Mint mark (A) and purity marking (986) to left, medallist´s signature (WELZ) to right. Legend: 1955 BELVEDERE 1956. Ten years Austrian State Treaty. Reverse: A page of the Austrian State Treaty, which shows four wax seals and signatures of John Foster Dulles (American diplomat, lawyer, and Republican Party politician), Llewellyn E. (American diplomat), Roger Lalouette (Deputy High Commissioner for Austria), Antoine Pinay (Foreign Minister of France) and Leopold Figl Austrian politician of the Austrian People’s Party (Christian Democrats) and the first Federal Chancellor after World War II. Legend: (striped shield) FRIEDE (striped shield) NEUTRALITÄT (striped shield) FREIHEIT Translated. The Belvedere is a historic building complex in Vienna, Austria, consisting of two Baroque palaces (the Upper and Lower Belvedere), the Orangery, and the Palace Stables. The buildings are set in a Baroque park landscape in the third district of the city, on the south-eastern edge of its centre. It houses the Belvedere museum. The grounds are set on a gentle gradient and include decorative tiered fountains and cascades, Baroque sculptures, and majestic wrought iron gates. The Baroque palace complex was built as a summer residence for Prince Eugene of Savoy. The Belvedere was built during a period of extensive construction in Vienna, which at the time was both the imperial capital and home to the ruling Habsburg dynasty. This period of prosperity followed on from the commander-in-chief Prince Eugene of Savoy’s successful conclusion of a series of wars against the Ottoman Empire. The Austrian State Treaty German. Or Austrian Independence Treaty re-established Austria as a sovereign state. It was signed on 15 May 1955 in Vienna, at the Schloss Belvedere among the Allied occupying powers (France, the United Kingdom, the United States, and the Soviet Union) and the Austrian government. The neighbouring Federal People’s Republic of Yugoslavia acceded to the treaty subsequently. It officially came into force on 27 July 1955. Its full title is “Treaty for the re-establishment of an independent and democratic Austria, signed in Vienna on 15 May 1955″ German. The treaty re-established a free, sovereign and democratic Austria. The basis for the treaty was the Moscow Declaration of 30 October 1943. This item is in the category “Coins & Paper Money\Coins: World\Gold”. The seller is “coinworldtv” and is located in this country: AT. This item can be shipped worldwide.