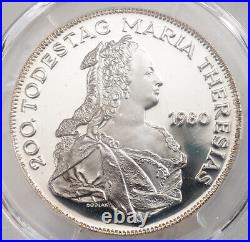 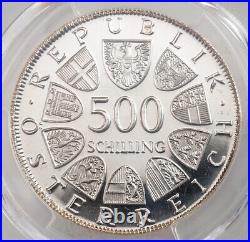 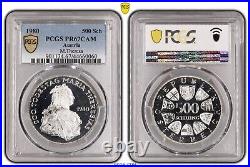 Silver 500 Schilling “Maria Theresa” Coin. Top Pop 3/0 PCGS PR67! Mint Years: 1980 Mint Place: Vienna Reference: KM-2949. Certified and graded by PCGS as PR-67! Denomination: Proof 500 Schilling. 200th Anniversary of the death of Empress Maria Theresa of Austria. 640 Diameter: 38mm Weight: 24gm. See also names in other languages; May 13, 1717 – November 29, 1780 was the Archduchess regnant of Austria, Queen regnant of Hungary, Croatia and Bohemia, and a Holy Roman Empress by marriage. Maria Theresa helped initiate financial and educational reforms, promoted commerce and the development of agriculture, and reorganized the army, all of which strengthened Austria’s resources. Continued conflict with the Kingdom of Prussia led to the Seven Years’ War and later to the War of the Bavarian Succession. She became dowager empress after the death of her husband Francis I, Holy Roman Emperor and accession of her son Joseph as emperor in 1765. Maria Theresa criticised many of Joseph’s actions but agreed to the First Partition of Poland (1772). A key figure in the power politics of 18th century Europe, Maria Theresa brought unity to the Habsburg Monarchy and was considered one of its most capable rulers. Her 16 children also included Marie Antoinette, queen consort of France, and Leopold II, Holy Roman Emperor. This item is in the category “Coins & Paper Money\Coins: World\Europe\Austria”. The seller is “coinworldtv” and is located in this country: AT. This item can be shipped worldwide.